China is known for its long states of tradition and etiquette.  Many things have been passed down to each generation such as mannerisms, and proverbs. Chinese daily life holds traditions westerners may find unusual, but this is part of Chinese customs and culture 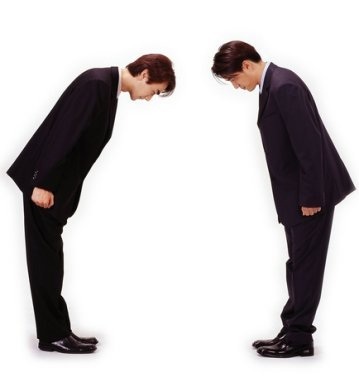 Example of modern bowing in Chinese Culture. Instead of raising and cupping one hand, Chinese people just simply lower their upper half to show acknowledgement 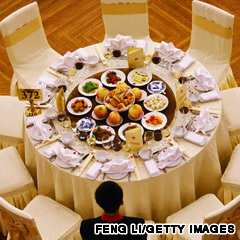 Chinese place setting. Notice how the food is place in the middle for everyone and is easily accessed?

Every country has a different dress code. When in China, it is important to dress suitably to Chinese views. Chinese people pay a lot of attention to dress codes and since China is a traditional nation, they value and emphasize the importance of etiquette. Chinese people think that to respect others, they must respect themselves in terms of clothing. For example, Chinese girls should wear decent dresses as a sign of respect to others, where they do not show too much skin. In certain views, it can be said that easterners are more conservative than westerners in clothing. An indecent dress can ruin one's dignity. Chinese people also like the color red because it is considered to be good luck and fortune.  Bright colors also match the mood of the atmosphere if they do not choose to wear red.
Traditional festivals are when Chinese people like dressing up. Women like to wear Qipao's or Cheongsam's and men wear the male version of these traditional clothing called Changsang's. 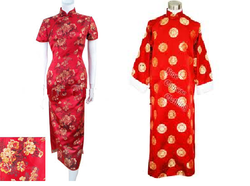 To the left are traditional Chinese clothing called the Qipao or Cheongsam for women and Changshan for men. It is a one piece traditional Chinese dress worn since the Manchu rule. The original Qipao was wide and baggy. It was a one pieced, high neck and straight skirt dress. This traditional type of clothing covered the entire body except for the head, toes and hands and was made of silk and featured embroideries. In the 17th century, it was worn everyday. During the Manchu rule, the chieftain established the Banner system that organized all Manchu families into divisions. In the 1920s the Shanghai dress became more modernized and popular among celebrities and the upper class, but lost popularity during the communist rule. Today's Qipao's are modeled after Shanghai's fashion. The one piece, form fitting and floor length dress was made with high slits on one or both sides of the legs and may be sleeveless and made out of different fabrics. They are only worn during formal occasions such as weddings, parties, pictures, and other more formal Chinese events. They are also sometimes used as uniforms in restaurants, hotels and airplanes in Asia.